Since soap is xml based, it is language and operating system independent. You can publish a soap service through your wsdl using Java on Linux and you can consume it through PHP application running on windows.

These days, SOAP is a bit lagging behind RESTful services which are rather more of architectural approaches than being protocol by themselves.

This is a tutorial showing how to consume an existing SOAP service using java language.

For this example, I will use a WSDL published on http://www.webservicex.com/globalweather.asmx?WSDL

In this one, I use already established wsdl for weather related tasks.

Eclipse has a nice tool to make life easier to consume SOAP related messages and I will show you here step by step.

1. Go ahead and create a new dynamic java project on your Eclipse 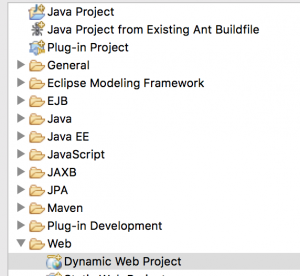 END_OF_DOCUMENT_TOKEN_TO_BE_REPLACED

SFTP, Secure File Transfer Protocol, is more applicable these days where cyber security is at its peak. Whenever possible, one has to use SFTP as the communications are encrypted.

Most of tools that are used for FTP like filezilla allows using SFTP with minor adjustment. SFTP has to be supported by the server that is providing the FTP server and usually uses different port than that of the FTP.

SFTP is pretty much like FTP as far the connection and usage is concerned. It has just another layer of security to make it more secure while uploading and downloading the file.

* You might ask isn’t jQuery javascript? Yes indeed you are right, but jQuery is a framework making javascript programming a lot easier.

When I say plain javascript, or as some are calling it old school javascript, I meant to use the same task without using jQuery.

Select box is one of the most used HTML element along with text input, radio option and the like.

Select box will allow you to provide dropdown options where you can select one or more items from it. You can make the select box to allow multiple selection using multiple attribute

END_OF_DOCUMENT_TOKEN_TO_BE_REPLACED

How to pass complex object parameter to jersey

In this tutorial, I will try to show how to pass composite object as a parameter to jersey’s endpoint java application.

If you are not familiar with jersey, jersey is an implementation of JAX-RS APIs. Hence, it is a seamless framework by which API based java projects can be implemented.

As of this writing, the current version of jersey is 2.23.
END_OF_DOCUMENT_TOKEN_TO_BE_REPLACED

This is part two of J2EE application with maven continued from Part One.

If you haven’t accomplished J2EE with Maven tutorial, please first complete it by going here

Maven relies highly on the pom.xml file that we would put on the project root folder. Lets do that.

In this part of J2EE tutorial and Maven tutorial, we will proceed from creating a pom.xml file which is the heart of maven.

3 Create the pom and compile the project using maven.

3.a put the following pom file in the MavenEclipseJ2EE directory.
END_OF_DOCUMENT_TOKEN_TO_BE_REPLACED

Now we have advanced a bit more and have served an html file from node js in this tutorial.

It would be a matter of updating the html file to have the user input box and adding one more route in node js to wait for specific url, getting the input and posting back the processed data.

In this part, the app will accept a name from the user and will print an email address containing the name that is provided.

How to get input from the user

If you have followed this tutorial, start from number 4

4. create server.js file in the folder node-input and add the following snippet in it.

7. Save this file and start the sever using

As you can see, the main point here would be adding one more route app.get("/getemail", function (request, response){ and accessing the parameters using the request object then passing the response with processed name in it.

The next would be to see how node can accomplish rendering the next page with values. And for that, there is a need to have template engine introduced.

Here We have see how to print a Hello World for a request of “/”. That is a good advancement but that won’t give us much to proceed. We need a way to server html files for different requests.

So, what we want to do is to have more flexibility by having html file. We will have all the contents as we wish using the old school html tag and we will serve that through node js.

If you have followed this then start from number 4

You will see Hello Node Js on the browser big and bold.

It is like the previous example except we are serving the actual physical html file this time.

By doing so, we have more control on the html file like adding css and javascript codes or calling those files on the page.

Mind you, index.html is the entry point, once we got on that page, we can navigate to other pages and do more

**If the above app is not working for whatever reason, make sure to update npm and get newest version

Next: Accepting input from the user and processing it.

By far, you have seen how to write to the console and to display hello world through web using node.

But, showing simply Hello World is not that interesting and fun at all. And it doesn’t show anything that simulates real world example of accepting input from user and processing that.

Before doing that, lets see the express package which would enable us to do that.

installing express package and creating a page with input boxes.

Now you will see something interesting when you go to browser and type http://localhost:8080.

This time you would get Cannot GET / Unlike the previous time.

express is framework that would make life way easier for the http communication between the nodejs server and whoever wants the request.

Among other things, it handle the http verbs, GET POST, DELETE, PUT, also it make the routing very easier. That is when you want to access some pages with something like http://gullele.com/list or http://gullele.com/register. That means the /list and /register are handles through routing mechanisms of express.

Update the server.js as follows

Now you will see Hello World on your browser when you type http://localhost:8080.

This time, we have created a router to response when the user lands on the root of the website.

Node provides its own web server that we can serve http request and responses.

I will cover on the later tutorial how those would be used, for now. All we need is to be able to go to http://localhost:8080 and see the the output of hello world

Serving the page through web server

If you have followed the above tutorial listed on the link, start from number 3.

3. On server.js add the following code in it and save it.

4. go to your browser and type http://localhost:8080 and you will see Hello World being printed on your browser.

Congratulations! you have successfully created a website that prints Hello World.

The above snippet creates a very basic yet full fledged web server. At the heart of any web server are request and response

request is what the browser behalf of the user is sending to the server and it waits for the server to give it back something to show to the user. The request is the one that contains the form elements usually

response is what the server would be responding based on the request forwarded to the server. It contains usually the type of the response data, like text or json or image through its header and the actual data to be returned.

require("http"); This part tells node to import the http package for usage.

With the hello world example above, the request contains no input fields but it is full request in that it is requesting for the response of hello world.

Don’t worry if you don’t get much of the request response stuff, as it would be clear on the upcoming parts of this tutorial.

Since simply printing Hello Worlds is not that much fun. We will see how to do some other exciting stuffs on the upcoming parts of tutorials.

Next: Accept input from the browser/user and process the input

node js step by step tutorial showing you how to create a full fledged node js angular js and mongo db for beginners who have never played with these technologies or played partially independently but not all those technologies together.

I assume installing nodejs to your computer can be found easily and I will not go through that.

Starting with a simple Hello world display with webserver

Node js is a fully functional webserver and processor that is created off of Googles V8 engine. It is very light weight and the syntax is javascript syntax.

Unlike other languages where you have to setup and configure a different independent webserver, node js, comes with a total self contained web server serving at ports that you can assign. Which makes it a full one stop web application.

For comparison, when working on php might require you to setup a different webserver like Apache or IIS.

In this part, I will show a very simple old school hello world example to be done in node js.

In the upcoming tutorials, you will see how to change those step by step.

3 on hello.js add the following code in it.

Then save the above file and run the file as

This will print Hello World in the CONSOLE.

The above code is running from the node js as a command line code. There is no any web server, that making it available through browsers per se, this time, it will just print that on right on the terminal you are running it.

You might know console.log() from your javascript coding and it is doing the same task here in node as well.